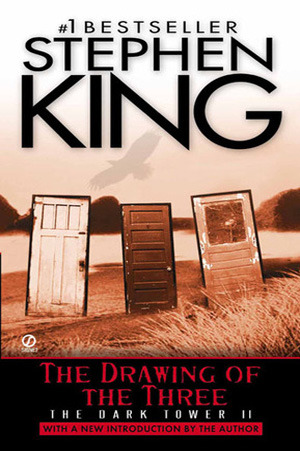 Title: The Dark Tower II: The Drawing of the Three

Brief Summary of the Plot: 7 hours after the end of the first book, Roland awakes on the beach, where he is attacked by lobster-like creatures called “lobstrosity”. The lobstrosity eats parts of a few of Roland’s fingers before Roland manages to kill it. The wounds become infected, and Roland realizes he is dying. Roland continues to walk down the beach, where he encounters three doors, which open into different time periods in New York. As Roland walks through the first two doors, he brings back a person who will help him on his quest (i.e., Eddie Dean and Odetta Holmes). The third door leads Roland to Jack Mort, who we find out was the guy who pushed Jake into oncoming traffic, killing him (which is how Jake ended up in Roland’s world). Roland goes into the mind of Jack Mort and is able to prevent him from pushing Jake.

The Writing: As with all of Stephen King’s books, the writing was great.

The Audiobook Recording: Nothing to report.

Expectations/Recommendations: I more or less had the same ambivalent feelings about this book that I did with respect to The Gunslinger. It’s hard to get into the story because there are so many moving pieces. Basically, though this book was just about collecting the companions–Roland stayed on the beach the entire time. This book was more or less building the back story of the two new characters, and revealing the connection with Jack Mort. I guess, however, that it is an important story insofar as the entire series is concerned.

1 thought on “BLAST FROM THE PAST BOOK REVIEW: The Dark Tower II: The Drawing of the Three by Stephen King”