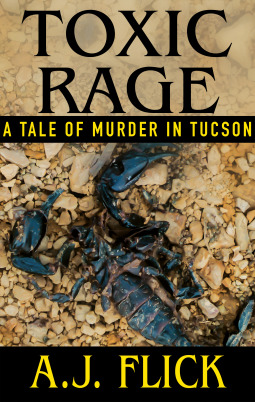 Title: Toxic Rage: A Tale of Murder in Tucson

Brief Summary of the Plot from Goodreads: Brian Stidham fell in love with Tucson, Ariz., the minute he came to town. A young and talented eye surgeon, he accepted a job with an established eye surgeon to take over his pediatric patients.

“It’s a beautiful place,” Stidham told a friend. “I can live right there by the mountains and go hiking. It’s a great deal for me there. The partner I’ll be working with is ultracool. He’s giving me the keys to the kingdom.”

Brad Schwartz, the doctor who hired Brian, was ambitious and possessed surgical skills few others had. But he was a troubled man.

Within a year of Stidham’s arrival in Tucson, the medical relationship would be severed by Schwartz’s personal troubles. Stidham broke away to start his own practice. Rumors abounded within the medical community that Schwartz was incensed and considered the departure a betrayal. His rage grew, even driving a wedge between him and his fiancée, Lourdes Lopez, a former prosecutor.

Three years after Stidham moved to Tucson, his life ended in an empty, darkened parking lot. But who would murder such a nice man in such a violent manner? Lourdes, who had witnessed Schwartz’s toxic rage toward his former partner, feared she knew. But would her suspicions be enough to catch the killer? Find out in TOXIC RAGE.

My Review: I received this book several years ago from Netgalley as an ARC in exchange for an honest review. I stopped reviewing books when the pandemic started for some reason, and am just going back now to read what I didn’t before. I’m a true crime junky, so I was excited to read this book about a case I had never heard about.

Brian Stidham was hired by Brad Schwartz to be another doctor is Schwartz’s ever growing practice. Although a successful doctor, Schwartz was plagued with troubles, eventually leading him to become an addict. While in rehab, Stidham leaves Schwartz’s practice to start one of his own, igniting a fury in Schwartz which eventually leads to Stidham’s murder.

The Goodreads synopsis of this book is a little misleading. The hook of the synopsis: “Lourdes, who had witnessed Schwartz’s toxic rage toward his former partner, feared she knew. But would her suspicions be enough to catch the killer? Find out in TOXIC RAGE,” makes it sound like Lourdes is the focus of the book and we follow her story as she tries to uncover the killer. This isn’t what happens at all. Lourdes is actually a very small part of the story. And actually, it was pretty obvious that Schwartz was the killer from the beginning.

While I liked this book, I felt that there was a lot of repetition. For example, Schwartz went around telling anyone he spoke to that he wanted Stidham dead. He even asked several people if they could kill him, or if not, knew anyone that could. We heard from each of these people. This got a little mundane and at points I found it hard to get through. It would have been more powerful if we had heard the details about one or two of the most shocking stories, and then the author could have lumped the rest into a brief paragraph or two.

Despite the above, I did find the book to be very interesting. Even though the book makes it very obvious from the beginning that Schwartz was the killer, the book still explores the other possibilities the police looked into. I thought it was good that the author wrote what actually happened rather than have an opinion as to what happened. The book seemed well researched and included information about interviews and court proceedings.

While I would recommend this book, it wasn’t my favorite true crime story.