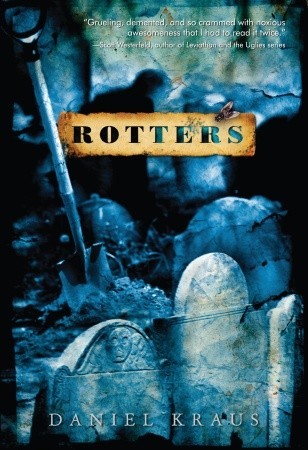 Brief Summary of the Plot from Goodreads: Grave-robbing. What kind of monster would do such a thing? It’s true that Leonardo da Vinci did it, Shakespeare wrote about it, and the resurrection men of nineteenth-century Scotland practically made it an art. But none of this matters to Joey Crouch, a sixteen-year-old straight-A student living in Chicago with his single mom. For the most part, Joey’s life is about playing the trumpet and avoiding the daily humiliations of high school.

Everything changes when Joey’s mother dies in a tragic accident and he is sent to rural Iowa to live with the father he has never known, a strange, solitary man with unimaginable secrets. At first, Joey’s father wants nothing to do with him, but once father and son come to terms with each other, Joey’s life takes a turn both macabre and exhilarating.

My Review: I had never heard of this book before, and I only started to read it because it was available as an audiobook from my library. From the subject matter, I wasn’t expecting it to be another young adult book (I seem to have read a lot lately), but after about 2 hours in, my first impressions are overall positive.

Essentially, Joey Crouch (nicknamed, of course, by the other kids as “crotch”) goes to live with his dad, the “garbage man” in a rural town of Iowa. Joey starts to be bullied because of his name, and his dad’s profession. At this point in the book, I really feel bad for him — but I am also a bit confused as to why he doesn’t seem to have any emotions about the tragic death of his mother. Her death doesn’t really seem to play into the story at all, except to give the reason / excuse for why Joey had to start living with his dad.

I am about 1/3 of the way through now, and my second impression is a little worse than the first. I am not sure why the author chose to have EVERYONE against the protagonist. He has conflict with his peers, his teachers, his father — there is not one good relationship. And yet, the author does not reflect this in the personality of Joey. Wouldn’t he be angry? Sad? Depressed? Overall, I am getting a lack of emotions from this book; like the characters are simply existing in the world, but not feeling anything. Even when the father takes him grave robbing for the first time, yes he gets physically sick, but there is still no emotion there. It’s only an action, and rather an inexplicable one, as the sickness comes on the morning after.

If I was supposed to feel sorry for Joey, I just didn’t. All of the emotions in this book were said, but not felt — if that makes any sense at all. It’s like, I can say I feel sad, but if I don’t act sad, who will believe me?

I wanted to like this book, I really did — but I just didn’t. It had glowing reviews on Goodreads, so I don’t know what I seem to be missing. The writing seemed to be decent enough, so maybe I will give Daniel Kraus another chance in the future.