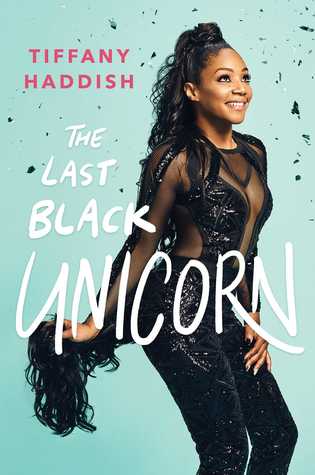 Brief Summary of the Plot from Goodreads: From stand-up comedian, actress, and breakout star of Girls Trip, Tiffany Haddish, comes The Last Black Unicorn, a sidesplitting, hysterical, edgy, and unflinching collection of (extremely) personal essays, as fearless as the author herself.

Growing up in one of the poorest neighborhoods of South Central Los Angeles, Tiffany learned to survive by making people laugh. If she could do that, then her classmates would let her copy their homework, the other foster kids she lived with wouldn’t beat her up, and she might even get a boyfriend. Or at least she could make enough money—as the paid school mascot and in-demand Bar Mitzvah hype woman—to get her hair and nails done, so then she might get a boyfriend.

None of that worked (and she’s still single), but it allowed Tiffany to imagine a place for herself where she could do something she loved for a living: comedy.

Tiffany can’t avoid being funny—it’s just who she is, whether she’s plotting shocking, jaw-dropping revenge on an ex-boyfriend or learning how to handle her newfound fame despite still having a broke person’s mind-set. Finally poised to become a household name, she recounts with heart and humor how she came from nothing and nowhere to achieve her dreams by owning, sharing, and using her pain to heal others.

By turns hilarious, filthy, and brutally honest, The Last Black Unicorn shows the world who Tiffany Haddish really is—humble, grateful, down-to-earth, and funny as hell. And now, she’s ready to inspire others through the power of laughter.

My Review: I had never heard of Tiffany Haddish before reading this book. I am giving it 5 out of 5 stars because I actually laughed out loud when I was reading this book — and that rarely happens, even when the book is supposed to be funny. This book is not only freaking hilarious, but Haddish reveals the good, the bad, and the ugly of her life in a surprisingly intimate fashion. From being called a dirty unicorn when she was a child (because she had an ugly wart on her forehead which looked like a horn), to sexism in the work place (comedy is still predominately men), and lastly to an abusive relationship with her twice ex-husband (she married and divorced him two times) Haddish reveals in poignant (and hilarious) essays how and why she is the person she is today. Where most people would have crawled into a hole and died, Haddish turned her pain into comedy and realized her dreams. I can’t help but to salute her for her triumph in the face of so many odds against her.

The Audiobook Recording: The audiobook is read by Haddish herself, which added tremendously to the book. Not only are the words themselves funny, but the way she tells the story makes it even funnier. Even when the subject matter is not really funny (like the parts about her abusive ex-husband) Haddish finds how to present it in a humorous way to get passed the uncomfortable part and get to the story. I think people in general do not want to hear about negative subjects like poverty, abuse, etc — but if you frame it in funny terms, people actually listen.

I would definitely recommend this book to everyone!

Brief Summary of the Plot: Calypso is a series of essays or stories. Most of the stories are about Sedaris and his family. Goodreads says “When he buys a beach house on the Carolina coast, Sedaris envisions long, relaxing vacations spent playing board games and lounging in the sun with those he loves most. And life at the Sea Section, as he names the vacation home, is exactly as idyllic as he imagined, except for one tiny, vexing realization: it’s impossible to take a vacation from yourself.”

The Writing: The writing is excellent. David Sedaris is probably one of the funniest authors I have ever read. I find myself laughing out loud at some of the many stories (I usually never laugh while reading, even if its supposed to be funny). For example, I particularly liked his story about getting a fit bit. Once he got the fit bit, he was obsessed with getting steps. Starting out with 10,000 he soon graduated to 20,000 steps a day, then 30,000, all the way to 60,000 steps! From walking around his tiny Sussex village (he was living in England at the time), to picking trash up off the road, he would find things to do just to make the steps. When his fitbit broke, he asked himself “Walking twenty-five miles, or even running up the stairs and back, suddenly seemed pointless, since without the steps being counted and registered, what use were they?” He promptly purchased another one.

The Audiobook Recording: the audiobook recording is also really great. The audiobook is read by the author, which makes it extra special, because, well, he is just a super funny guy. Parts of the audiobook seem to be recordings of his stand up comedy acts. My favorite stand up act was about the things people said around the world to curse out another person during a road rage attack. It went something like this: “The Romanians really do lead the world when it comes to cursing. “What have you got for me?” I asked a woman from Transylvania who was now living in Vienna. “Shove your hand up my ass and jerk off my shit,” she offered. I was stunned. “Anyone else would say, ‘Shove your hand up my ass,’ and then run out of imagination,” I told her. “You people, though, you just keep going. And that’s what makes you the champions you are.” Maybe it’s not too late to learn how to drive, I thought, watching as she walked out the door and onto the unsuspecting streets of Vienna, this poet, this queen, this glittering jewel in a city of flint.”

Expectations/Recommendations: I previously read another book by David Sedaris (Let’s Explore Diabetes with Owls) back in 2017, and I remember liking it. This book surpassed my expectations. I would definitely recommend it.