The theme of this week’s Sunday Stills Photo Challenge, is called “Spring has Sprung”. Spring is a time for renewal and starting over, the time when the winter chill is left behind and the warm summer months are just over the horizon, and the time when life awakens.

When I think of spring, I always think of flowers. The only recent photos of flowers that I have are from my trip to Japan. 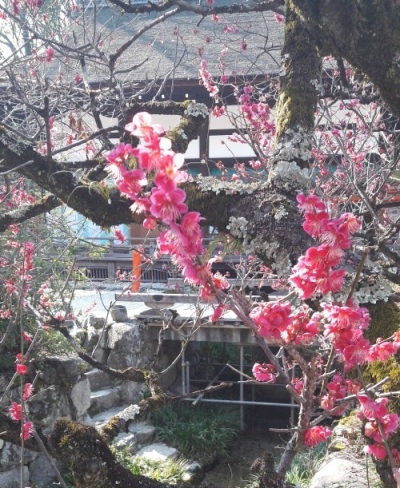 A few weeks ago I was lucky enough to travel to Japan on a business trip (it was my first time being there). My company has offices in Hiroshima, and we were there for one week giving a training on legal issues. We spent the weekend in Kyoto, since we were giving the same training at our office in China the following week, and we didn’t want to fly all the way back to Austria on Friday, only to have to return to Asia two days later again on Monday.

On that Saturday morning, I woke up earlier than my colleagues (I had skipped the bar the night before), and decided to take a run / walk to see what I would find. Kyoto has many shrines throughout the city, and I just happened to stumble upon this beautiful shrine called the Shimogamo Shrine, one of the oldest in Japan.

Even though the trees were just starting to bloom, we were unfortunately, a few weeks too early for cherry blossom season. To be honest, I am not sure whether the photos are of cherry blossoms or plum trees (or something else). All I know is that I was captivated by the beauty and vividness of the colors, especially against the white and brown backdrop in the photo above, and the orange bridge in the photo below. 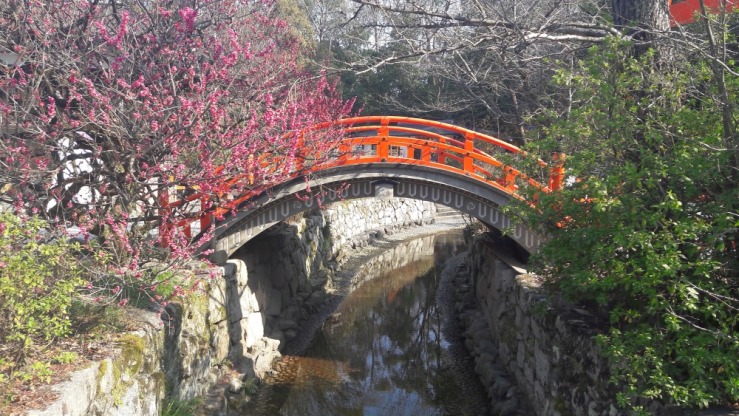 Japan is such a cool and spiritual place. I really enjoyed my time there, and would love to travel there on vacation sometime in the near future. I do not know how to describe being there. I somehow felt at home / at ease, even though I had never been there before. If given the chance, I would definitely live in Japan, at least for a few months. It was just truly magical.

I was really surprised by some aspects of Japan, however.

For example, we tried to get into several bars and were told at the door that it was “Japanese only”. I don’t know whether this meant that they only spoke Japanese (and so only people who spoke Japanese were allowed inside) or whether they meant that only Japanese people were allowed inside. I don’t want to think that it was the latter (because discrimination is uncool however you look at it), but on the other hand, I can’t imagine it was due to any language barrier (because sometimes the menu at these places had the word “beer” in it — and so it would have been easy to order). I wonder what they would do if a non-Japanese person who spoke fluent Japanese tried to get it.

While the rebirth of the flowers in Kyoto was beautiful, the renewal process of Hiroshima after the atomic bomb was heartbreaking. I teared up several times while looking at the Atomic Bomb Dome (see photo below). This building is still standing after the 1945 a-bomb and is now a World Heritage Site. It was a little bit embarassing, since my colleagues were with me, and I had to walk away several times with the excuse that I was taking photos.

Even though I wasn’t alive in 1945, I felt such shame to see this building, because I knew that it was my country that had blown it up, and killed more than 140,000 people, about 40% of the Hiroshima population at the time. On the other hand, it was amazing to see the regrowth of the city in the last 74 years. The city now boasts more than 1 million people, and if it wasn’t for the Dome building, no one ever would be able to guess that the city had once been decimated.

The Japanese crane, a symbol of hope and healing, also reminds me of Spring. 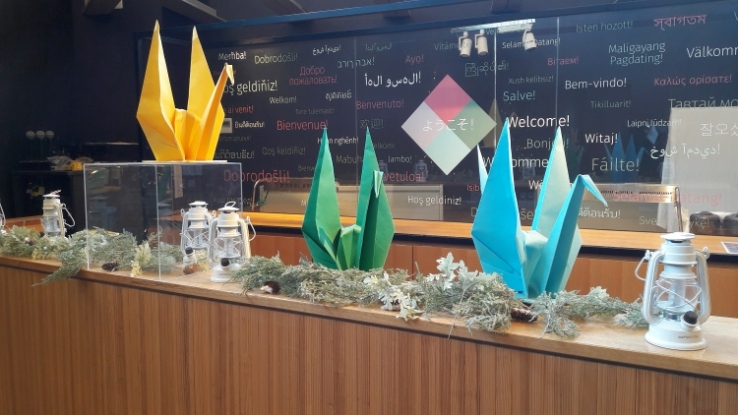 Traditionally, it is believed that if you have 1,000 origami cranes, then your wish would come true. At a newly built tower (the brown building behind the Atomic Bomb Dome in the above picture), visitors can make origami cranes. There are videos which give you the instruction to make them. Even with the tutorial videos, it is not easy at all!

Once you are finished with the crane, you drop it down the side of the building. I was a little disappointed that I wasn’t allowed to keep the crane, but once it was explained to us why, I felt a little better. The purpose of making the cranes was to fill up the side of the building with origami cranes. It was actually pretty neat. My crane is currently sitting with hundreds of other cranes in Hiroshima. I hope to go back one day to see how far it is filled up (it wasn’t so full when we were there).

What does spring mean to you?