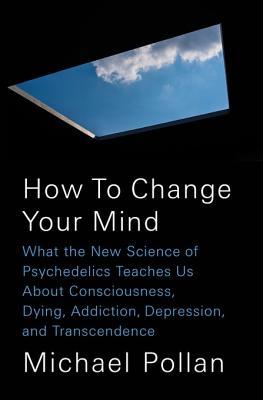 Title: How to Change Your Mind: What the New Science of Psychedelics Teaches Us About Consciousness, Dying, Addiction, Depression, and Transcendence by

Brief Summary of the Plot from Goodreads: “A brilliant and brave investigation by Michael Pollan, author of five New York Times best sellers, into the medical and scientific revolution taking place around psychedelic drugs–and the spellbinding story of his own life-changing psychedelic experiences. When Michael Pollan set out to research how LSD and psilocybin (the active ingredient in magic mushrooms) are being used to provide relief to people suffering from difficult-to-treat conditions such as depression, addiction and anxiety, he did not intend to write what is undoubtedly his most personal book. But upon discovering how these remarkable substances are improving the lives not only of the mentally ill but also of healthy people coming to grips with the challenges of everyday life, he decided to explore the landscape of the mind in the first person as well as the third. Thus began a singular adventure into the experience of various altered states of consciousness, along with a dive deep into both the latest brain science and the thriving underground community of psychedelic therapists. Pollan sifts the historical record to separate the truth about these mysterious drugs from the myths that have surrounded them since the 1960s, when a handful of psychedelic evangelists catalyzed a powerful backlash against what was then a promising field of research. A unique and elegant blend of science, memoir, travel writing, history, and medicine, How to Change Your Mind is a triumph of participatory journalism. By turns dazzling and edifying, it is the gripping account of a journey to an exciting and unexpected new frontier in our understanding of the mind, the self, and our place in the world. The true subject of Pollan’s “mental travelogue” is not just psychedelic drugs but also the eternal puzzle of human consciousness and how, in a world that offers us both struggle and beauty, we can do our best to be fully present and find meaning in our lives”

My Review: This book was interesting, but not one of my favorites. Although I liked some of the anecdotal stories that Pollan tells about his own personal experiences with psychedelic drugs (from magic mushrooms to frog venom), I found the science aspects of the book to be rather dry — but I guess that is just the nature of very scientific subjects.

I had such high expectations of this book, based upon the raving review of my boyfriend, that I felt a bit disappointed by my lack of enthusiasm in reading it. I thought it was going to be some enlightening story, that drugs like LSD, etc., would suddenly make sense to me. That I would “see the light” so to speak. Maybe I am just skeptical that a drug which admittedly alters ones perception artificially can somehow treat mental illnesses. That could just be “the establishment” brainwashing me to be against drugs, but who knows.

But the book had its redeeming qualities as well. I found several stories very intriguing, especially those about Paul Stamets, a mycologist (a scientist specializing in mushrooms). Pollan described several interesting patents that Stamets held, including one for a mushroom which was used as a natural ant killer. How do you ask? You should read the book to find out.

Being somewhat of a Startrek fan, I also found it very interesting that the creators of Startrek Discovery decided to name a character Lt. Commander Paul Stamets, and that such character knows more than anyone in the world about space mushrooms. Coincidence? I think not.

Despite my failure to be blown away by the subject matter, I did find it interesting overall. If you are looking for a scientific read that pushes the boundaries of societal norms, then I would recommend to read this book.