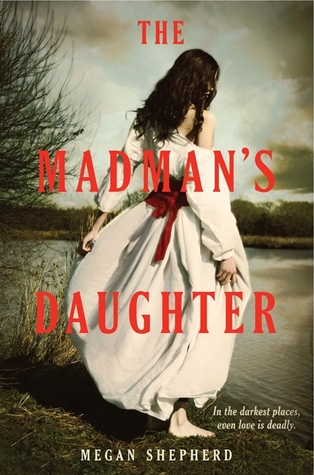 Brief Summary of the Plot from Goodreads : Sixteen-year-old Juliet Moreau has built a life for herself in London—working as a maid, attending church on Sundays, and trying not to think about the scandal that ruined her life. After all, no one ever proved the rumors about her father’s gruesome experiments. But when she learns he is alive and continuing his work on a remote tropical island, she is determined to find out if the accusations are true.

Accompanied by her father’s handsome young assistant, Montgomery, and an enigmatic castaway, Edward—both of whom she is deeply drawn to—Juliet travels to the island, only to discover the depths of her father’s madness: He has experimented on animals so that they resemble, speak, and behave as humans. And worse, one of the creatures has turned violent and is killing the island’s inhabitants. Torn between horror and scientific curiosity, Juliet knows she must end her father’s dangerous experiments and escape her jungle prison before it’s too late. Yet as the island falls into chaos, she discovers the extent of her father’s genius—and madness—in her own blood.

Inspired by H. G. Wells’s classic The Island of Dr. Moreau, The Madman’s Daughter is a dark and breathless Gothic thriller about the secrets we’ll do anything to know and the truths we’ll go to any lengths to protect.

My Review: After a horrifying scene in London, where Juliet walks in on some medical students performing vivisection of a live white rabbit, Juliet discovers that her father was in fact alive (although presumed dead for many years). The author describes the scene with the rabbit so vividly that it left me queasy for days. I still shudder when I think of the rabbit’s screaming. I know it is imaginary, but things like that really hit me hard. I cannot stand to think of animals suffering, even fake ones.

Similarly, that Dr. Moreau performed his operations on his creatures without any pain killers or anesthesia is just terrible, unthinkable even. I wanted to cry just thinking of the pain inflicted on these poor animals. What a sick and twisted character. What makes me more upset is thinking that maybe in real life back in those days scientists really did perform these types of “surgeries” on animals. Animal cruelty is just so not okay. I was bothered that no one tried to stop Dr. Moreau. Why didn’t Juliet or Montgomery just kill him? I felt like maybe they were a little brainwashed, or maybe this was supposed to be an indication that they had “morals”? That they were not killers like the mad doctor. I don’t think that I could have stood by and let that go on.

I read some reviews which pooh-poohed the love triangle between Juliet, Montgomery, and Edward, but I didn’t feel the same. I didn’t find it sappy, or unbelievable. Montgomery was Juliet’s childhood friend (even though he was their servant’s son), and as an adult her childhood affections had turned romantic. She had conflicting emotions, however, because he was helping Dr. Moreau torture animals to make his “creations”. With respect to Edward, there was something in him that Juliet was physically drawn to despite her mental reservations about it, although we don’t really find out what that physical draw was until the surprise ending.

The writing was very good, and the story was suspenseful. Although I liked this book, it left me unsettled — the same feeling I came away with after reading H. G. Wells’s The Island of Dr. Moreau. I cannot fathom why this book would be classified as “young adult”. I wouldn’t say this book was “scary”, but it certainly was very disturbing, and I think that the story will stay with me for a while.