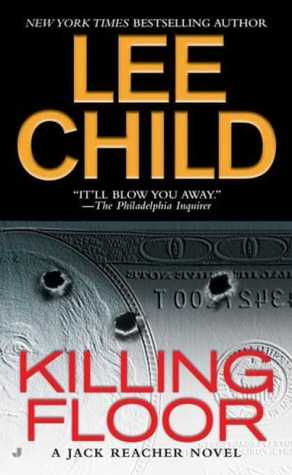 Brief Summary of the Plot from Goodreads: Ex-military policeman Jack Reacher is a drifter. He’s just passing through Margrave, Georgia, and in less than an hour, he’s arrested for murder. Not much of a welcome. All Jack knows is that he didn’t kill anybody. At least not here. Not lately. But he doesn’t stand a chance of convincing anyone. not in Margrave, Georgia. Not a chance in hell.

My Review: Okay, so there are spoilers in this review because I’m giving it a 1 star and no one should read this book. I picked up this book because of the movies and the series about Reacher. They are pretty decent, and since books are usually better than the on-screen adaptations, I figured I was in for a good time. Wrong!

First of all, the summary from Goodreads is not what the book is about. Reacher convinces the police that he wasn’t the killer in the first part of the book, and then spends the rest of the book investigating the murders alongside the police. It’s totally misleading.

Additional plot points: It turns out that Reacher’s brother Joe (who worked for the treasury department) was investigating the biggest counterfeiting ring in the US and it got him killed. Reacher has to find out the who, the why, and the how, to solve the case.

While the premise sounds ok for an action book, I just couldn’t get into the story. The first main issue with the book is that the prose was terrible. I felt like I was reading a freaking Trump speech. A prime example of this is below:

“We found the right street. Found the right house. Decent Place. Well looked after. Neat and clean. A tiny one-storey. Small yard, small single-car garage. Narrow gate in the wire fence. We went through. Rang the bell. An old woman cracked the door against the chain.”

This is how the WHOLE BOOK IS WRITTEN! It made it really hard to read without wanting to tear my eyes out. Would it kill the guy to use a freaking comma once in a while?

The second and third issue that I had with this book, was that the main character Jack Reacher is completely unlikeable and the premise behind the plot is just ridiculous. Jack Reacher is a highly trained army veteran who got laid off from the army, so he just wanders around the country. In one of the biggest coincidences of all time, he ends up in some small backwater town in Georgia the day his brother (who he hasn’t spoken to in years) is murdered. Seriously? I think the odds of winning the lottery are better.

After being mistakenly arrested for this murder, and killing a few guys in the county lockup, he is removed as a suspect. He then hooks up with the hottest girl in town, Roscoe, who happens to also be a cop.

Their relationship is on the fast track. Then we start to get scenes such as the below:

“So we showered. Put us in a better frame of mind. We soaped up and started fooling around. Ended up making love in the stall with the water beating down on us. Afterwards, I just wanted to curl up in the glow.”

So we go from hardened army veteran willing to kill remorselessly and violently (ok it was in self defense, but still) to snuggle bunny. Is this the author’s way of making the main character balanced or well rounded or something? Guys, he might be a viscous killer, but he also likes to cuddle! He has depth!

And speaking of depth, Reacher doesn’t even know how to do his own laundry…he just throws away his clothes! He’s so cool (not).

“Next stop was the basement. I fiddled around with the furnace until it kicken in. Then I stripped off and shoved all my clothes in Charlie’s electric dryer. Set it on low for an hour. I had no idea what I was doing. In the army, some corporal had done my laundry. Took it away, brought it back clean and  folded. Since then, I always bought cheap stuff and just junked it.”

Even though Reacher has fallen head over heels for Roscoe, in the last chapter of the book, after a night of talking (so he’s a snuggle bunny AND a good listener…), we get this. I have to say, I thought: “WTF?” Reaches waxes eloquent about this woman for the whole book and then after a night of talking is like, oh well. What happened to the snuggle bunny? What happened to the sensitive guy he was supposed to be? Doesn’t he care at all?

“It didn’t work out for Roscoe and me. It never really stood a chance. There were too many problems.”

The main problem? Apparently Roscoe doesn’t like that Reacher is capable of remorselessly and viscously killing like 10 people. Makes her a little uncomfortable. I wonder why. What annoys me a little bit, is that the reader is supposed to think that this guy is cool or a major badass or something. He just comes across as a little bit of a psycho. This book is written in the first person, so these thoughts are HIS thoughts, what REACHER is thinking. It’s not the narrator giving us a blow by blow of what is happening. So like, when the book is describing how he has to saw the knife into the guys neck to kill him, this is what REACHER is thinking about as he’s doing it.

“Hauled his head back. Cut his throat. You don’t do it with one elegant swipe. Not like in the movies. No knife is sharp enough for that. There’s all kinds of touch gristle in the human throat. You have to saw back and forth with a lot of strength. Takes a while. But it works. It works well. By the time you’ve sawed back to the bone, the guy is dead. This guy was no exception.”

Serial killer much? Would have been fine just to stop at “cut his throat.”

And all these problems made it really hard to get into the story, let alone enjoy it. It wasn’t even that the background story was so interesting either. Sigh.

Would I recommend this book? No. Do yourself a favor and just watch the movie instead.