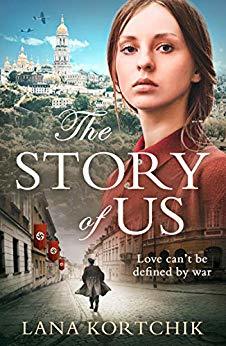 When the Nazi’s begin to execute the Jewish population of Kiev, and as the occupation continues (family homes and possessions are stolen, people are starving to death and/or sent to work camps), Natasha’s romance takes on a bitter-sweet quality. “He was a Hungarian solider sent to Ukraine to support Hitler’s troops. And she was a Soviet girl, who was completely and irrevocably under his spell.  What was she going to do?”

Will their love survive the war?

This book was very well written and researched, and will make you cry at times, and feel joy at times. I really like this book, which is why I guess I was so disappointed in the ending. The story seemed to wrap up too quickly in one chapter — all the loose ends were just poof! tied up neatly in an instant in the last few pages.

Regardless of the ending, this book is definitely worth the read.

Check out this book on Goodreads: The Story of Us http://www.goodreads.com/book/show/40852948-the-story-of-us